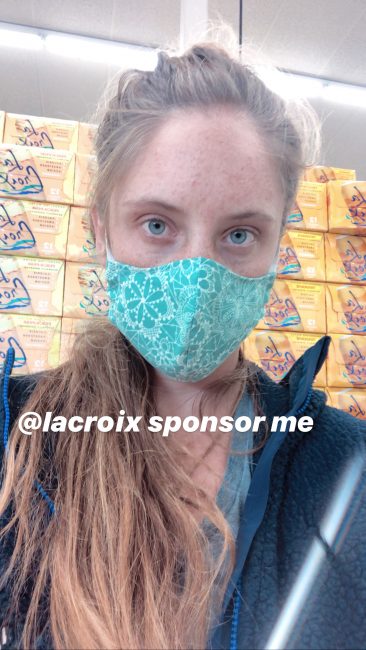 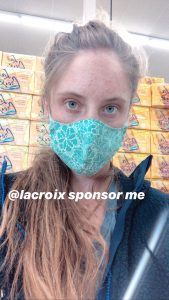 My new roommates and I went to Whole Foods the other day.  We wore our cute, personalized cloth masks and after waiting in line out front of the store, six feet apart from other parties, we got inside and quietly roamed the store, giving space to all the other masked shoppers.

Everyone was in a mask.  Actually, a woman and her teenage son weren’t, but they were the literal only people without some kind of face covering.

More recently, another friend and I stopped in Safeway after climbing in some rural area and I noticed that no one but eye-rolling employees wore masks.  Maybe like, three customers.  My friend and I weren’t wearing masks either; we’d just been outside all day and needed to make a quick stop, and I completely forgot what u n p r e c e d e n t e d times we were in.  Oops.

I’ve been ruminating on the phenomenon, how it seems like affluent grocery stores are filled with mask-wearing shoppers and the every-man’s store just…isn’t.  Its the same at Fred Meyer vs Market of Choice.

I’ve been wondering if this is a socioeconomic issue, where the working class just don’t have the same access to information about public health and safety as do their upper class neighbors.  Or is it political?  My Facebook news feed is full of conspiracy theories about Bill Gates creating the virus, the CDC lying about the numbers, how we’re a police state, etc. etc. and I honestly get it; my life got upended in this pandemic and I was mortified of losing control.  More specifically, of being controlled.  (“What do you mean I can’t park at trail heads? This is literally public land!  It’s mine!”)  I’m watching reasonable friends share admonishments to the rest of us to “wake up!” and realize we’re being duped by millionaires who are apparently obsessed with vaccinating poor people into oblivion.  Also, this is America! Don’t tread on me!

Sometimes lately it feels like masks are more of a show than anything; I wear a mask to prove I’m educated and care about my neighbors.  Its a kind of real life virtue-signaling.  Maybe the upper class, and those who want to be upper class, are just facing more social pressure to be good, to be moral, and protect the elderly and immune compromised.  Maybe a lot of them are just trying to escape the social stigma they’ll face at Trader Joes if their face is bare.

It feels like not wearing a mask is a political statement; I’m maskless because I’m not like you sheeple just trusting a corrupt big government. Wake up. I’ve seen memes about masks and ignoring the arrows and walking the wrong way down grocery store aisles shared by my conservative friends, and the general vibe I get is they’re fiercely protective of their rights to choose (ironic!) and their freedom of expression. They’ve never felt so policed.  They feel its unjust to force a population to wear something on their face that they don’t want to, and they’re reasonably wary of governmental control.

Or is it that just the salt of the earth working class in these rural towns aren’t sitting around debating big government or conspiracy theories about Bill Gates?  They’re essential workers; they’re busy just going about their lives, and their friends and coworkers aren’t wearing masks so they don’t think about it.  Their communities aren’t pressuring them to don masks the way affluent communities seem to be doing the opposite, and again, I don’t know if its out of genuine concern or if its out of some need to prove how educated and compassionate they are.  Or is it mostly social pressure?

Why do you wear a mask to grocery stores or why don’t you?  And does it change, depending on the grocery store you visit?  What about when you stop at cafes for a latte?  I’d love to hear your thoughts.