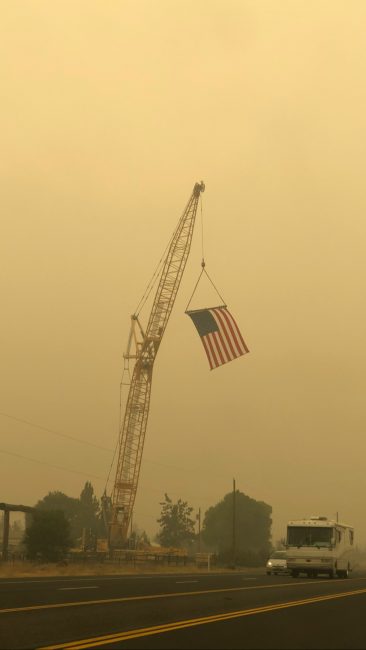 The wildfire season this year was out of control.  It was the scariest, most apocalyptic thing I’d ever seen…or not seen.  I mean I could stand at the trailhead leading down into Smith and couldn’t see the rocks for the smoke.  I drove extra slow because I couldn’t see more than a car or two in front of me.  We couldn’t be outside (and we live outside) because the air quality was so hazardous they had to add a color to the map to describe it.

It kinda broke all of us, the happy-go-lucky car-dwelling climbers who’d spent all summer dodging covid, skinny-dipping in rivers, belly-laughing on acid in the desert and falling off our favorite rock climbs.  I mean, we went to protests and read anti-racism books and talked about Trump being a monster too, and how we were scared, but it wasn’t until the wildfires fucked up our air quality that everything really hit home.

My friend Ama was house-sitting in Terrebonne and let a few of us come over to get some clean air and mourn together.  The booze flowed, the tears followed. I cried about my boyfriend and politics and environmental destruction.  Elina cried about a guy and politics and the environment too.  Moira cried and didn’t know why; she just sat there crying and shrugging.  “I don’t know why I’m crying.”

It was the smoke, a disaster that came on slowly and then all at once, choking us when we went outside and holding us hostage in hotels and friends’ homes, unable to go running or climbing or cycling or anything.  It broke us.  I started having nightmares about burning alive in my car while I tried to flee, or about my dog dying if I was evacuated and they wouldn’t let him come.  I started having nightmares about the CIA spying on me.  I got into a three-day-long battle with my boyfriend where all my trauma showed itself in this ugly, vindictive rage because he wouldn’t leave town with me.  I got drunk a lot.

For a group of people like my friends and I, who live by weather reports and who move our bodies more than the average joe, the hazardous smoke was a soul-crushing thing.  Top it off with the racist presidency and his anti-environment policies and we just couldn’t handle it.  We broke.  We broke Covid restrictions and hung out in that farm house and wept together for days, and braved the outdoors to jump on the trampoline until we started coughing.  I would lay in the grass and take a deep breath to feel my ribs move and try to understand what my body was feeling, and it felt like smoking an entire unfiltered cigarette.  I was breathing ash, and my heart ached in my chest knowing that ash was people’s homes, their pets, the deer and chipmunks and sparrows and junipers that died.

We learned that the nearest reservation didn’t have running water but they *did* have a Covid outbreak, and a massive fire that one of our friends went to go fight.  The unfairness of us being there, crying about the smoke as privileged foreigners there while the actual native people who’ve lived on and loved this land for centuries before we did were suffering so much devastation made us want to scream. I felt guilty for existing, and guilty for my grief.

It was like the entire wretched year was falling down on us.  I felt like it was fitting; why shouldn’t the air be hazardous and the sky and trees and rocks invisible if Covid and a fascist president were winning?  What did we expect.  I thought of the animals burning to death in the woods around us, the trees dying, the homeless in the PNW looking around them in terror.  It seemed like everything I loved was going up in flames; the land, the people, the animals, the idea of freedom and hope, my relationship, etc.  I felt hope vanish, and I knew I didn’t deserve that hope anyway. 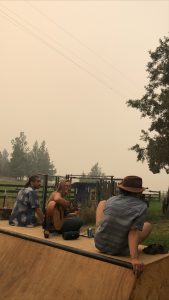 And then…one night while we drank and cried and sang and made art, and our friend who’d been off fighting fires had returned to sing and play and tell us about the “masculine energy” he felt radiating from that destructive force of nature, I looked up at the gray/black sky and did a double-take. I could almost swear there was a light up there.  One tiny, glimmering, faint little light peeking through the ocean of smoke we hadn’t seen through in a week.

My friends ran to me.  Someone yelled it to the folks still indoors and they came out too.  My friends all stood next to me and I pointed up, my heart racing.

“Holy shit that’s a star! That’s for sure a star!”

“Wait! I see another one! Look! Over there!”

So I looked up at the faint little stars fighting through the smoke and I howled like a dog, and my friends laughed and joined me.  We stood outside necks outstretched and howled our dry little throats out at the sky, hope and bitterness and desperation on our tongues.  And I started to laugh and cry all at once, howling at the stars with my friends like that.

Because it wasn’t over.  The fires were still raging.  The politicians who don’t believe in climate change are still in power.  The people who vote for those people still drive their raised trucks around leering at me and my friends.

But it’s like we were given respite just a little break from the misery and constant let-down and pain.  We are people who live outside and watch the constellations move across the sky with the seasons, and we hadn’t seen stars in weeks until all of the sudden we did.  I never wanted to take a star for granted again, just like Covid has made me want to never take traveling, kissing my friends, being in their homes, visiting relatives, going dancing, crowded buses, etc, for granted again.

Just like I never want to take democracy for granted again.

The work is not done and we didn’t get exactly what we wanted, and there is wreckage to heal, but if you need to let yourself howl at the stars and laugh and kiss your friends because of this election, and you feel hope and excitement for the first time in what feels like four years, I say let yourself.  I say howl and dance and take every little win, every little star, and hold it to your heart and cherish it.  Don’t take it for granted.

We have work to do, but we have celebrating to do, too.  Don’t forget you’re human and this is a relief, and you’re allowed to be happy right now.

And maybe it’s not quite happiness.  Maybe it’s just relief and you’re still afraid of what’s to come.  Me too.  I’m there too.  The problem didn’t just go away.

I’m just saying it feels, to me, like those little stars felt after not seeing them for so long.  It feels like hope.  I’m gonna howl with my friends and dance in the streets, and I’ll deal with the rest of the smoke after that.